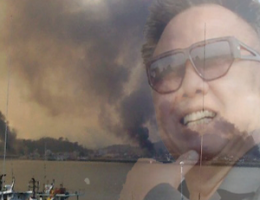 By Styles Cradgerock, SEOUL – People’ve got a tear in their beer over here as former buddies North and South Korea have ceased speaking, emailing , or chatting online.

Hot sweaty tensions were ratched up and ramped up Tuesday when the North, wearing only a thong and a backpack, pretended not to know the South, when they passed by each other in Pasta La Vista, the South’s trendiest trattatoria.

“I saw them at Pasta La Vista Tuesday afternoon and they didn’t even say ‘hi'”, complained the South.

“They’ve really crossed the line now,” chimed La Vista regular Ray Goolens, 44, referring to South Korea. “I expect we’ll all be speaking North Korean anyday,” he went on, possibly in reference to a likely nuclear attack on the South by the North this weekend.

“We hate the regulars,” said La Vista owner Grande Chef Otto. “They just take up space,” he went on.

Full disclosure: Grande Chef Otto is a regular feature columnist for the Brutal Times. He paid me to write this article.

North Korea has better ribs than South Korea. Even vegans admit it’s so.

Full disclosure: I have no thighs.

In South Korea all week government workers have been sitting at their desks surfing the Internet.

In North Korea there is no Internet.

When Al Gore visited there last year he promised to hook one up if the North dumped their nukes in the river.

“We could not understand him,” said one North Korean official, Carl Underwood, 12. “I don’t know if his English was any good or not; I just kept looking at his head,” he went on.

So, is there any solution to the Crisis in the Gulf? Can’t the two Koreas merge and blend into a multicultural rainbow?

It’s a question someone should put on an exam somewhere.

“Maybe the North feels really guilty about what it did and is going around really discombobulated,” U.N. head honcho quipped on his Facebook homepage.

Closely following the rules of Pythagorus - to abstain from beans, not to pick up what was fallen, not to eat the heart, and refusing to look in a mirror after midnite, Cradgerock gets all up in the grills of all the world's leaders and their pets like you knew he would.
View all posts by Styles Cradgerock →
This entry was posted in Presidential Daily Brief and tagged korean food, north korea, Presidential Daily Brief, ribs, south korea, styles cradgerock, the brutal times. Bookmark the permalink.