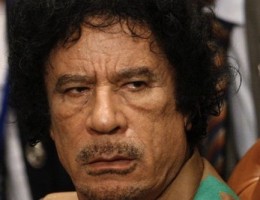 MySpace morning man Randy Andy, 45, said Ghadafi, or “MG” as fans call him, is “pumped for a new album and tour”, even though he hasn’t released anything since his hit single, “Chad”, back in the ’80’s.

“MG – Mommy – is pumped for a new a new album and tour, and his doctors say he’ll be able to perform 10,000 shows at London’s 02 stadium next month if he isn’t assassinated by some hater first,” Andy went on.

MySpace has been courting the Middle Earth heavyweight ever since people forgot about it (MySpace).

“FaceBook and Twitter have that Mark Zuckerberg guy in their ads and Steve Jobs, Google has Obama…Ghadafi is basically the only celebrity left,” a spokesperson from MySpace said, on the condition that they not be named in this article because we made them up.

Hey, how should we spell Ghadafi’s name? Is it Ghadafi, or Gaddafi, or..?

“Just choose one, stick that in the headline of your blog and tag all the rest.”

But, hey, how about that guy…what’sisname?

“Obama, speaking on condition that he not be named in this article as he didn’t know what he was talking about…”

Sweet little Daemon Mailer invented the internet in his garage while he was trying unsuccessfully to invent the first rental video store. Like the rest, Daeme is also making moves to cash in on BT's success and avoid eating peanut butter out of a jar livin' in his car the rest of his life. All during the night as he wiggles to an 'fro, some kinda machine records his thoughts, churning out a pile o crud to be compiled in the forthcoming tome, “I am Spam.”
View all posts by Daemon Mailer →
This entry was posted in Latest Brutality and tagged daemon mailer, dennys, facebook, libya, mark zuckerberg, middle east 2011 revolutions, myspace, MySpace backing gaddafi in social network war, obama, steve jobs, the brutal times, twitter. Bookmark the permalink.