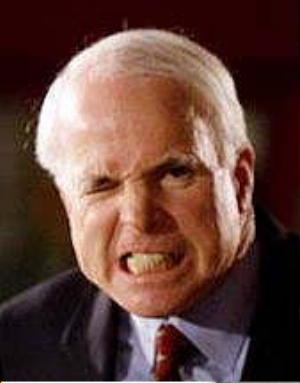 By Barry Hussein, DETROIT- Freshly-minted Republican primary front-runner John McCain may have placed his chances of victory this Tuesday in Michigan in jeopardy.

McCain, 71, who ran much of his campaign for the presidency in 2000 aboard a bus known as “The Straight Talk Express” is well-known for his wit and refusal to mince words, but recently these same tactics seem to have landed him in hot water.

In recent days, facing what has become an increasingly tight race between himself and former Massachusetts governor Mitt Romney, McCain has found himself repeatedly under verbal attack from his smartly-groomed rival.

On Sunday, campaigning in Michigan, McCain struck back.

When during a televised town hall debate Romney begged McCain to “just admit that you’re in favor of granting amnesty to this country’s ten million illegals,” McCain shook his head and then smiling, commented dryly “Why don’t you have another Romulan Ale, Romney?”

Romulan Ale is illegal in the United States.

Romney, whose father is Romulan, admitted in his book “Upswept Eyebrows, Distant Dreams” that he had taken sips of the super-charged blue colored alcoholic beverage during childhood visits with his grandfather to shrines in the Romulan capital, Romulus.

“Senator McCain crossed the line with his brutal attack,” said Case Metcalfe, who is one of Romney’s chief strategists in Michigan. “He blew it. The American people don’t go in for personal attacks, and I really think this is going to hurt him,” she added.

Romney said later that McCain’s comments amounted to a “racial slur” and challenged McCain to “come to Romulus and tell the good people there how he feels.”

The Republican leadership contest has provoked heated exchanges between former Massachusetts Governor Romney, who just three weeks ago was believed by many to be a shoe-in for receiving the party’s nomination, and McCain, who up until the primaries began had been widely thought to be well ahead of the Republican pack, facing only a potential threat from Rudolph Giuliani.

With Guilani biding his time until later primaries, to the surprise of many political analysts fresh challenges have sprouted from Romney and Mike Huckabee.

Huckabee, who was resting at popular Michigan eatery Shh…Kebab between door-to-door stops at Detroit households said “I know John McCain. I like John McCain. I don’t think that this is the kind of thing that he’s about. It’s cold outside and a lot of people having been reacting to that and saying stupid things.”

McCain himself has so far said only that he was “tired” and had been distracted by Romney’s trademark low-cut hair which is trimmed in the traditional Romulan helmet style, straight across the forehead and close to the eyebrows.

“To respond to a legitimate criticism, by uttering further hurtful sayings, it really doesn’t add to the debate,” commented Miner Davidson, who was handing out Romney “Stand Up & Be Counted” bumper stickers in Detroit. “I don’t see how all of this in-fighting really helps the Republicans. If they were Vulcan I’d say ‘Let’s just settle things with a mind meld,’ but perhaps that’s just my wishful thinking.”

A ferocious intellect, Barry Hussein is not for everybody. Twisting and frugging the nite away, Hussein entices us to sniff his mink sweatpants. Covered in cake, he muses, "Sometimes the hardest sweatpants to fill...are your own."
View all posts by Barry Husein →
This entry was posted in Presidential Daily Brief and tagged 2008 US election, barry hussein, brutal times, election, mccain, mitt romney, romney, romulan slurs, romulans, star trek, the brutal times. Bookmark the permalink.

10 Responses to McCain Feels The Heat For Romulan ‘Slur’