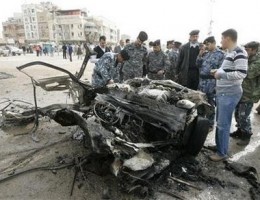 By Barry Hussein, BAGHDAD – As you find yourself spent from the Olympics and the Academy Awards etc., you’re probably gonna wanna bone up on the key players in this weeks’ exciting Iraqi parliamentary elections. We at the Brutal Times care about your street cred and status as “that cool kid” on your block. So, for all the piping hot spoilers about this year’s democratic vote that time fergot, see below, Joe.

And the nominees for Iraq’s prime minister are…

Nouri al-Maliki – The prime minister is chasing a second, seventy-eight year term in a plush corner office in Baghdad’s tallest building, The Phallus, contesting this election as the head of his Tough Love Coalition. Al-Maliki first shock-rocketed to fame in May 2006 after winning the priemership during a game of rock, paper, scissors. Al-Maliki himself has said he favors “coarse language” over beheadings and swift punches to the carotid artery, and is a champion of targeted so-called “smart pinches” to the bum-bum. Plus, “I like the American English word ‘douchebag’ he says now, “but it is difficult to make rhymes with,” he steamed.

Since becoming prime minister, Al-Maliki has insisted all Iraqi government sext messages be conducted in verse. He particularly likes New Wave lyrics writtenby the J. Geils Band. “That’s why he is so cool,” says JamJam, an exotic dancer at the club I was resting at. Al-Maliki has been harhly criticized for depending on a small but gifted troupe of sex trade workers from his BoogieDown Party to advise him on everything, from what kind of brunch he should order to the best method of execution for bad people. Al-Maliki likes blondes, generally a little shorter than average, and says he “doesn’t care so much” about breast size.

Jalal Talabani: This award-winning breakdance king and sidewalk chalk artist is serving a second term as president and loves it so much he’s giving up his freedom to do it just one more time, for another eighty-two years. He founded the Patriotic Union of Kurdistan in 1975, tattooing “Kurdistan is Super-fine” on his inner thigh later that night. But after travelling to Helsinki, Talibani changed his mind about Kurdistan being the best place for booty. “He came back from there (Helsinki) and he smelled like a bum,” Talabani’s best friend Milo Oots says. “Then he showed me all the chalk art sketches he had done of the hot babes he met there and I began to see that he wasn’t totally insane,” he went on. According to Cute Pets Magazine, which profiled Talabani for its winter Schnauzer issue, the two best friends renamed their party the “I Wanna Move to Helsinki – Who’s with Me? Party”. Teens and seniors broke windows in Talabani’s chalet, complaining that the new name was “confusing” and too long. The name change did, however, garner Talabani a mistress – pert 58-year-old Canadian model Undo, whose hobbies include horseback riding and shrieking.

Adel Abdul-Mahdi: The Shiite vice president is a French-speaking ventriloquist who has an English accent. At 756 pounds in the raw, Abdul-Mahdi has been a prime minister in waiting since 2005. “First I waited in front of the parliamnet buildings,” he says now, “but there  was no shade and so I got this hideous sunburn down the middle of my face.” Later, Abdul-Mahdi waited in his car and a nearby supermarket; still the plumb position failed to come a knocking. A big fan of the Iranian-backed Spreme Islamic Iraqi Council Party, Abdul-Mahdi twice came close to being prime minister but missed out to candidates from the Dawa Party who had woken up earlier and arrived at parliament before him. “I forgot to set my alarm clock,” he says now.

Tariq al-Hashemi: The Sunni vice president, his eyes popping out like raw eggs, is Iraq’s reigning veggie hot dog eating champion. He has been among the harshest critics of Prime Minister Nouri al-Maliki, joking about his height, weight, and hygiene. After quitting school at 54, Al-Hashemi roamed the streets “twisting and frugging the night away”. “I thought I’d never get enough af all night karaoke,” he confided to me, winking at something he saw somewhere.

So, what happened, man?

“I got enough of all-night karaoke,” he says now.

Muqtada al-Sadr: The sexy author of S&M manuals is not running in the election but has endorsed the vote, saying, “I like it, and at the same time, I don’t.” In the past, Al-Sadr – who is single, girls  – denounced elections as a sham because they were held under the American “occupation”. But unnamed insiders like Ray Goolens say he may merely be biding his time until his agent gets an offer for him to star in a mainstream Hollywood comedy film or tv series. “I  see Al-Sadr, and I think of Ice T on Law & Order, or Ice Cube in Friday,” says impresario Matsumoto Boy, Sadr’s longtime agent at BB Fun Corp.

Ayad Allawi: The former prime minister is the self-taught face of secular politics in boring post-Saddam Iraq. People adore his lack of acne and other skin troubles. “If I could, I’d like, graft his face – onto my face,” inisted my daughter, Trixie, 17. “But I would wax the moustache first,” she went on.

Back in the 1990’s, Allawi worked as an all-night lion tamer, before turning his back on the profession when people he didn’t like “started copying me.”

How did you feel when you told the top tamer you were quitting?

Ibrahi al-Jaafari: is like, Jeez – another former prime minister!?! Best remembered for his refusal to buy drinks for the Brutal Times, this is all the space he gets.

Ahmad Chalabi: With his boyish smile, former Hollywood Yoga instructor Chalabi is running in the same coalition led by the Supreme Etc. Once a Bush family favorite, Chalabi failed to win a seat in the last parliamentary election, in 2005, and has spent the last 5 years standing up. “I can’t wait to sit down,” he says now. Chalabi’s groovy relations with the United States soured when the sweet inteligence he provide on Saddam’s WMDs caused the US to invade Iraq, suffering thousands of casualties and deaths, whilst wiping out untold scores of Iraqis over a 7 year period. “Yeah, I made few mistakes,” he says now.

A ferocious intellect, Barry Hussein is not for everybody. Twisting and frugging the nite away, Hussein entices us to sniff his mink sweatpants. Covered in cake, he muses, "Sometimes the hardest sweatpants to fill...are your own."
View all posts by Barry Husein →
This entry was posted in Iraq, Presidential Daily Brief and tagged barry hussein, iraq parliamentary elections, Presidential Daily Brief, the brutal times. Bookmark the permalink.