Hillary Stuck In Tight 3-Way With Obama And Edwards 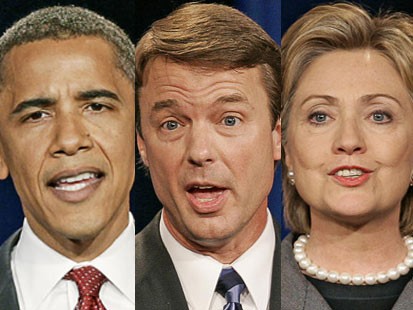 By Styles Cradgerock, IOWA – With both Democratic and Republican caucus members braving record-low freezing temps to root for their favored candidates early this morning, hushed voices in the Democratic camp were overheard whispering that former front runner Hillary Clinton appeared stuck in a tight “3-way” with Obama and Edwards.

“The candidates are close – very close,” said a member of Senator Obama’s campaign committee, who asked not to be named for this article because she “didn’t want to be mistaken for playing that ‘he said, she said’ game.”

“Although there are many differences between Mrs Clinton and Mr Edwards and Mr Obama, there is…an attraction there, albeit maybe something that’s unspoken, that binds them together,” ventured Carlotta Seacastle, a 21-year-old philosophy student at Berkeley, who is skipping the first week of classes to attend the caucusing in Iowa.

“I’m personally really not all that surprised to see them stuck in a 3-way. But maybe that’s partly because I’ve been studying in California,” she added.

Tight 3-ways between candidates are not uncommon during party primaries held at this time of the year.

In 2004, Democratic candidate John Kerry may have ironically lost votes when after being locked in a 3-way for weeks with fellow Democrats John Edwards and Al Gore, he suddenly experienced a surge and abruptly pulled out, leaving Edwards and Gore behind and bewildered. Although Kerry achieved the nomination of his party, many observers say he was effectively spent by the time the primary contest was over.

With news of the “3-way” between the leading Democratic candidates dominating most of the nation’s media over the holiday weekend, many political observers turned naturally to the next big question on the primary list: How long now, before a 3-way might take place on the Republican side?

“I don’t see it happening,” said Balthazar Quack, 65, a retired veterinarian who was campaigning for Republican John McCain.

Closely following the rules of Pythagorus - to abstain from beans, not to pick up what was fallen, not to eat the heart, and refusing to look in a mirror after midnite, Cradgerock gets all up in the grills of all the world's leaders and their pets like you knew he would.
View all posts by Styles Cradgerock →
This entry was posted in Presidential Daily Brief and tagged 2008 US election, barack obama, hillary clinton, john edwards scandal, Presidential Daily Brief, the brutal times, tight 3 ways, us politics. Bookmark the permalink.