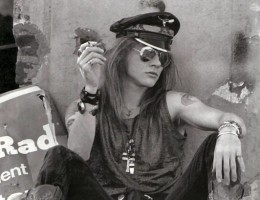 “Signs that they (N’) began their tour sans Axl by accident continue to pop up online,” confirmed IT professional Beau Jolie, 29, who was sunning himself yesterday in Tokyo’s semen park Yoyogi Koen whilst surfing the World Wide Web on his handy mobular telephone.

“Guns – sorry – N’ had played Belarus, Detroit, Toronto, Pensacola, Baffin Island and most of the Oceanic neighborhood,” Mr Jolie went on, deleting mounds of Russian spam from his inbox as he carried on our in-depth interview. “Which is good – yes i love to see Guns – N’ – but there is one problem, other than that of missing Slash – that the band forgot to take with them Axl,” he kept talking.

Axl Rose has been the singer of the band for a long time. He has long hair and blue jeans. Anyone reporting seeing Axl should call Guns N’ Roses – sorry, N’, and let them know what train station he is nearby so they (N’) can pick him (Axl) up.

Better than nothing, DJ Salinger shakes it where the sun don't shine. BT' s resident recluse on the loose, Salinger is the trouble with this generation, begging the question, What is the sound of one fist bumping?
View all posts by DJ Salinger →
This entry was posted in Thinking Man's Rock and tagged axl rose, chinese democracy, chinese democracy tour, dj salinger, guns and roses, guns n roses, N', slash, the brutal times, yoyogi koen. Bookmark the permalink.