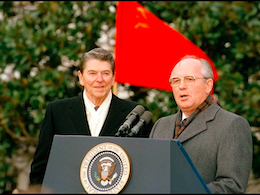 By Styles Cradgerock, MOSCOW ON THE HUDSON – Mikhail Gorbachev has responded to Vladimir Putin’s statement that he won’t attend the former Russian leader’s funeral.

“I’m not going, either,” Gorbachev, affectionately known by fans as Gorby, said Friday. “I have other plans.”

News that Gorby also won’t be going sparked furious head-scratching debate as to what he would be doing instead.

“I wonder if he’ll be going golfing,” wondered Dan Corduroy, an avid golfer. “But I can’t recall if he was really a golfer,” he went on. “Strange,” he went on even more.

Gorby said only that he “had a thing,” without elaborating on why he was skipping the ceremony.

There was no word whether Gorby’s absence would stop world dignitaries from attending.

“They’re at everything,” he went on. “I can’t wait to see what they’ll wear.”

Closely following the rules of Pythagorus - to abstain from beans, not to pick up what was fallen, not to eat the heart, and refusing to look in a mirror after midnite, Cradgerock gets all up in the grills of all the world's leaders and their pets like you knew he would.
View all posts by Styles Cradgerock →
This entry was posted in Presidential Daily Brief and tagged Gorbachev, Olympic Committee Chairman Thomas Bach, Tedros "Ted"Adhanom Ghebreyesus, the brutal times. Bookmark the permalink.