Girl ‘Still has Feelings for’ Ex 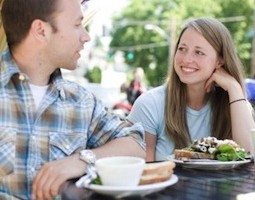 By Mary-Lou Jasp, Special to the Brutal Times, NEW YORK CITY – Usually when I break up with somebody I’m already seeing someone else. Like when I broke up with Brad I was already seeing his friend Jesse, but I’d been so busy I didn’t get to tell him ’til later.

But last week when I broke up with Caro, my BF for the last 2 months, I totally forgot that I did’nt have a new BF yet! Lucky for me I could go online and chat with my online friends. And I could listen to Nickleback and Coldplay, my fave bands.

I went to check his Facebook but he de-friended me.

Talk about an overreaction!

Lucky for me I could call up some of my ex-boyfriends to talk about my prob. Toby shocked me so bad when he said “Maybe you still have feelings for Caro.”

That night I couldn’t sleep! I ate a cake and then I went online for a few hours to chat with friends.

Finally I couldn’t stand it – I called Caro on my iPhone. There was no answer! Then a message came on saying his number was out of service!

Then I remembered Caro told me he was gonna kill himself if I broke up with him. Just like Berry and Robin.

Jimmy…Peter! Hadn’t thought about hime for a while. And Ken!

And Glenn, James, Jimmy from Spain…Yves!

And Frank, Timmy, Kris- or was it Chris? Long hair…never a good idea.

And…but …oh I gotta go, I think Eric is texting me. I hope he’s feeling better. Just because I cancelled last time, he like didn’t call me for…a while I guess.

A bit of a toff, really, Admin inhaled the classics early. His ears are ringing and he plans...to answer them.
View all posts by admin →
This entry was posted in Ordinary People and tagged coldplay, exes, facebook, girl still has feelings for ex, iphone, nickleback, Ordinary People, relationships, relationshit, rollerblading, the brutaltimes. Bookmark the permalink.

One Response to Girl ‘Still has Feelings for’ Ex