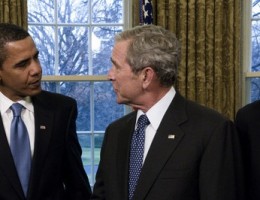 By Styles Cradgerock, WASHINGTON – Coming hot on the heels of his Nobel Peace Prize win, US president Barack Obama  has spiced up the biggest humanitarian tragedy thus far in 2010 by tapping his former political rival George W. Bush to head the rescue effort in Haiti, along with former president Bill Clinton.

Bush, apparently, being given yet another chance to rehabilitate his legacy, will head the Obama administration’s first original war.

“We (Mr Bush & Clinton) kinda, took a lotta the options off the table, you know, before he came into office,” explained Mr Bush in a joint press conference with Mr Clinton, Sunday. “I had, you know, the ‘war on terror’ – although really it was Scooter’s idea,” he went on.

“And I had, you know, even though I guess you could say it kind started with Ronald Reagan, and uh, continued under Mr Bush’s father – ah, we had, you know, ‘the war on drugs’ in my administration,” Mr Clinton attempted.

Although Mr Obama has yet to wrap up either the “war on terror” or the “war on drugs” his own administration is seeking to define itself in a whole new global struggle against what is perhaps man (and woman)’s deadliest enemy.

“But that doesn’t mean we’re – I don’t think the president is necessarily scrapping ah cap and trade, or ah the Kyoto Protocols,” Mr Clinton ejaculated.

“Nature…is bad,” Mr Bush went on. “Unless we stops it, more o’ these tremblers can happen, and that’s why Bill and I are ah stepping up to meet this valuable threat.”

“And you saw, after, from with Katrina, that Nature was bad, even then,” Mr Clinton prompted.

“You, well, despite what the media ah had been reporting, ah there were some valuable lessons to be learned from the hurricane experience in New Orleans, ah back in 2003 or 2004,” Mr Clinton went on.

“Well…I don’t…I don’t follow you.”  To the Brutal Times: “Listen, we don’t always agree on the issues, but he’s been over at my house and I ate hot dogs in his yard,” he went on.

So will this new “war” like, have all sorts of fancy new associated media catchphrases like “make no mistake”, “ratchet up” “radicalise” or “Nigerian man”?

(Laughing) “I think I’m gonna have to let George answer that one, although I think I may have to claim credit for “three strikes or you’re out” Mr Clinton ejaculated.

“Well, in all seriousness – and this, what we got here, this’s a serious matter, I think what we oughtta instead to be doing, (instead of thinking up new catchphrases…like WON) is to – ask what can people be doing…to help, prepare for this courageous battles.”

Oooooooooh!  This is new. Okay, whut can we do?

“I’d like to make the request, that the American people go and see Avatar – everything, all you need to know’s in that one movie.”

Closely following the rules of Pythagorus - to abstain from beans, not to pick up what was fallen, not to eat the heart, and refusing to look in a mirror after midnite, Cradgerock gets all up in the grills of all the world's leaders and their pets like you knew he would.
View all posts by Styles Cradgerock →
This entry was posted in Presidential Daily Brief and tagged avatar, bill clinton, george w bush, haiti earthquake, hurricane katrina, obama, schadenfreude, the brutal times, war on drugs, war on nature, war on terror. Bookmark the permalink.