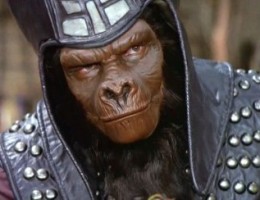 By Barry Hussein, WASHINGTON – Fearsome warlord General Urko is said to be “quaking with venomous rage” at U.S. president, the American Barack Obama’s choice to pass him over for the plumb position of new commander of U.S. forces in the Afghan humanitarian intervention.

Obama briefed reporters in the White House Beer Garden yesterday on his decision to select General David Petraeus for the job. Cornelius and Dr. Zaius stood by sipping cold non-alcholoic tall boys but giving no outward signs of emotion.

Obama will send eight more brigades of starship troopers to Afghanistan before 2014, says Coco Nostradamus, who is also predicting the continuing of the recession, followed by the destruction of the planet around that time. Yet Ms. Nostradamus also predicted General Urko as a shoe-in for the Afghan jobbie, so who knows, right?

General Urko displayed his displeasure at the Petraeus pick , Twittering expletive-laden sports metaphors from The Planet of the Apes, where he is currently stationed.

The Brutal Times, in consideration of family values, has declined to reprint the comments at this time.

But we may sell them later on a dvd.

U.S. Senator Mitt Romney, who grew up on nearby Romulus, accused Obama of “playing favoritism” in picking a fellow human for the post.

“I don’t think (the Petraeus pick) really mirrors us as an intergalactic society,” Romney said in Romulan.

Then he began to twist and frug the night away to the grinding bass of The Beastie Boys’ “Intergalactic”.

A ferocious intellect, Barry Hussein is not for everybody. Twisting and frugging the nite away, Hussein entices us to sniff his mink sweatpants. Covered in cake, he muses, "Sometimes the hardest sweatpants to fill...are your own."
View all posts by Barry Husein →
This entry was posted in Presidential Daily Brief and tagged afghanistan, barry hussein, cornelius, dr. zaius, dwayne nostradamus, general petraeus, General Urko, mitt romney, Presidential Daily Brief, romulus, sports metaphors, stanley mcchystal, starship troopers, the American barack obama, the beastie boys, the brutal times, the planet of the apes, twitter, white house beer garden. Bookmark the permalink.