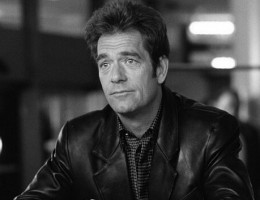 By DJ Salinger, VANCOUVER – In what could only be described as the fulfillment of any record store clerk’s wildest sexual fantasy, Gavin Forthebream, 30, a part-time cashier at Vancouver’s Virgin Records MegaStore found a lone copy of mythical Huey Lewis and The News album “Server Not Found” at tea time on Monday.

“It was on the shelf – in the Huey Lewis and The News section,” Mr Forthebream said, in a not too pleasing voice.

Not quite the voice one would expect from someone who had found what amounts to the holy grail of 80’s rock.

“You mean you found it – on the racks, just lying there?” I asked.

“Ah ha. Well if that’s the case then please be so kind as to inform me as to why no one in this city of 40,000 had previously thought to come in and buy it? I mean it must be worth at least thirty million dollars,” I shot back like a sharp shooter in Apocalypse Now, Generation Kill, etc.

“Maybe because…it sucks?,” the snotty little punk actually had the nerve to come back with.

I was two seconds away from doing to him what Mickey Rourke and Jacko had shelled out good money to have done to themselves when I realized he must be off his medication and speaking in tongues.

That seemed to smooth things over a bit and he switched on his flashlight and led me round back to the shrine he had built for the precious record inside the store’s dumpster.

The dumpster smelt not so good and the copy of Server Not Found was way at the back covered in guck and ooze.

“This is like a scene out of Slumdog Millionaire,” I said to lighten the mood.

“Haven’t seen it,” he replied.

“Nor have I, but I’m certain there’s a scene in it like this,” I retorted and brayed laughter until the walls of my mind felt like the hollow insides of an unwanted pumpkin.

Anyway I got the CD, put it on the stereo and boy does that shit rock.

Despite the disrespect shown by Mr Forthbream, I’m certain other youngsters will love and treasure this record as much as I do.

I’m really shocked it was overlooked when it came out in 1992.

Maybe it was overshadowed by something.

If you’re into music you should also search out The News’s 2003 effort Mission Accomplished. Although it’s never really clear what the mysterious mission is, after a few listens I’m certain you’ll agree they’ve accomplished it.

Better than nothing, DJ Salinger shakes it where the sun don't shine. BT' s resident recluse on the loose, Salinger is the trouble with this generation, begging the question, What is the sound of one fist bumping?
View all posts by DJ Salinger →
This entry was posted in Stories For Bottoms and tagged 1980's music, dj salinger, eighties pop, huey lewis, huey lewis and thw news, legendaery lost albums, missing albums, mission accomplishes, the brutal times, the news, Thinking Man's Rock, virgin records. Bookmark the permalink.