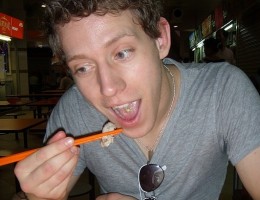 By Ohashi Jozu, TOKYO – As Japan cannot fight back against evil China, a new plan for revenge, revenge of any sort, damnit, has taken shape during the hours of 9 – 5 in the back alleys sandwiched between green government offices and a delicious Chinese dumpling restaurant.

Beginning November 16, foreigners living in, entering or leaving Japan will be tested on their ability to use chopsticks. Those who fail to demonstrate “appropriate mastery of chopsticks scheme” will be deported immediately to their home country or Canada at their own expense.

Almost all foreigners are expected to fail.

The Brutal Times has learned that Narita Airport, point of entry and departure for so many foreigners wishing to come to Japon to sex Japanese woman, take advantage of high Japanese yen and so on, has erected 50 high definition Sony HD Chopstick Testing Devices, or CHUDD, named after the popular 1980’s horror film adored by many Americans, to scan and grope the testes of testees. Haneda Airport is also strictly enforcing a policy of CHUDD chopstick testing of all foreingers who think they’ll just sneak off for a good time in nearby Thailand.

How will CHUDD work? By clamping on to the genetalia of test takers as they struggle to pick up tiny morsels of airline food with chopsticks supplied at the test site by JAL and ANA, Japan’s premier airlines. (You don’t need to bring your own chopsticks, so please leave them at home – they may be confiscated as a weapon).

Testers like Admiral Hirosawa Etsuko advise foreigners to apply early for the chopstick test and to pay the 200,000 yen fee today before banks close at 4:00 pm. In Japan, prompt payment is required and testees showing up at the airport whom have not prepaid for their tests will be deported to their home country or Canada at their own expense.

“One cannot make the payment by convenience store or in cash,” Hirosawa sama insisted. “The payment must be made at the farthest bank from the foreigner’s gaijin house or hotel in Roppongi,” she went on.

Chopstick ability is well-respected in Japan, but few foreigners ever bother to even learn the basics of using the beautiful eating utensils.

“I haven’t eaten anything but McDonald’s double cheeseburgers since I arrived in Japan,” whined Indiana resident Janice Hodge, 22, who is an ALT ( a living tape recorder) ‘teaching’ English in an all girls military school in beautiful Gunma prefecture. “And I’m not familiar with how to use napkins, or ‘moist towlettes’ as they call them here, so my fingers are always greasy,” she went on.

Lucky for her, moist towlette use will not be tested until 2012.

“I beleive foreign persons cannot use Japanese ohashi, which is chopsticks,” ejaculated Mr. Yamaguchi Nobuyuki, a teacher of Japanese English at an all boys military school in beautiful Gunma prefecture. “But I will be laughing as I watch such foreigners try to feed themselves on my television,” he quipped, warming to the subject.

Whoever is the Japanese prime minister is having a real tough time of it at the moment. His senses reeling, he stumbles about, gasping and moaning, his every waking moment a fresh body blow from China. He topples into a prickly bush and rips his pants wide open. An angry wind blows up his nose. He texts the Steering Committee.

And so, my Internet bandwith will be reduced and I have to bone up for that chopstick test before I head to Haneda Airport on my way to the real land of smiles, Thailand.