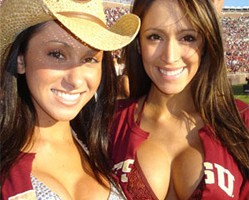 By Styles Cradgerock, ATLANTA – Football. More than just passing a ball around. But is it, really? Nonetheless a whole lotta people love this great American pastime.com. Yet more and more, more of them (the lovers) are calling for football to fail.

“Gaffes- give us more gaffes,” grinned sheepish Joe Thamblehorn, Thursday. “I love football, but I love seeing and hearing ESPN gaffes even more!” he ejaculated.

What kinda gaffes we talkin’ ’bout?

And…this kinda gaffe made you all hot and bothered?

“It ruffled my feathers.”

And that’s a good thing?

“It involved me not only as a viewer, but as a person – in that it reactivated my critical thinking abilities.”

Unexpected! Whut other kinda gaffes you be liking?

“Oh, I dunno. I’ma be liking how about when one guy falls down or one o the commentaters says something racist?”

That’s pretty general, but I guess it’s what we’re left with.

“Sure-sure. Take what you can get, right?”

Well…no use staring into the horses’s mouth.

Closely following the rules of Pythagorus - to abstain from beans, not to pick up what was fallen, not to eat the heart, and refusing to look in a mirror after midnite, Cradgerock gets all up in the grills of all the world's leaders and their pets like you knew he would.
View all posts by Styles Cradgerock →
This entry was posted in Exclusive!. Bookmark the permalink.