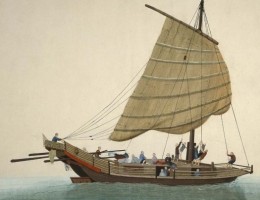 By Barry Hussein, MACAO – The Internet Machine was abuzz this morning with news that a dad, Roland Hawthe, 22, a barista native to Long Island says that a Chinese ship violated international law.

China has accused the USA of violating international law for sailing sailing away why don’t you take me sailing away i don’t know where I’m goin’ to in Chinese waters.

So who’s telling the truth?

China or the dad?

“I looked at the photos of the Chinese ship on CNN,” said Mr Hawthe via his iPhone. “That ship had its bow and its prow in US waters.”

Miles Cheng, a Chinese State spokesperson disgreed with the dad.

“The US Impeccable, which is the ship which committed the crime against China, was nowhere near US waters, but in fact was in China,” asserted Mr Cheng as he gripped my bad arm tightly.

“The USA has green water at the time of day the incident occurred,” twitted Mr Hawthe so quickly we could hear the hairs growing and dying all over his huge body.

“The water in the CNN photo is blue, as is China’s,” Mr Hawthe glommed.

But the point is a US citizen who is a dad  totally disagrees with China.

Plus, they pulled their pants down – the Chinese did.

Chinese sailors and their ladyfriend guests reportedly mooned US naval crew members on the US Impeccable during the incident and this shock-rocked them so bad we’ll never hear the end of it.

“President Obama should totally nuke China,” Hawthe argues. “If he does, I will vote for him and his family for a second, bonus term in the White House, including use of the recreational facilities at Crawford (the Bush family retreat) and at the homes of agents Scully and Mulder (characters of the fictional tv series the X-files).

A ferocious intellect, Barry Hussein is not for everybody. Twisting and frugging the nite away, Hussein entices us to sniff his mink sweatpants. Covered in cake, he muses, "Sometimes the hardest sweatpants to fill...are your own."
View all posts by Barry Husein →
This entry was posted in Presidential Daily Brief and tagged barack obama, barry hussein, chines ship, chinese, chinese ship, cnn, crawford, dad, dads, international law, iphone, macao, mulder, sailing, scully, twitter, violation, white house, x-files. Bookmark the permalink.