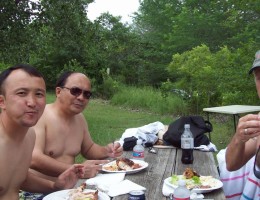 “Old people – people over 25 – should just go die,” chimed child chimney sweep Gerhardt Toomey, 30. “To tweet they want more, much less even some, is annoying to the extreme,” he went on.

“My dad’s always using my computer,” blurted Patricia Ketts, 40. “I hate him,” she frothed.

Unlike previous generations, the Starbucks Generation, is getting down and boogying longer than, well, I mean, who woulda thunk, right?

Full disclosure: I’m one of the previous generation.

“Why can’t you let go of the pie and just die, guy?” whined Neal Peterson, 36, at the Genius Bar as he checked my laptop for scuffs.

Because I love life too much, I replied.

Look, just like you I’m excited about the Internet and Apple products, although I’m thinking of trading in my iPhone for an Android.

‘Cause the generations are so much closer now. Like, years ago, like maybe in the 1990’s even, I wouldn’t even be caught like dead in here talking to you, but now we like the same music, we buy the same clothes, I mean, I’m 50 and you’re, what, 22, but it doesn’t matter. We’re like bro’s.

I want my pie.

What’s that music you’re listening to?

What’s that music you’re listening to?

Hilarious! I love Abba, too!

“I wasn’t really listening to them – it’s a preset.”

How do I set up GarageBand?

Where can I get a job application to work here?

Sweet little Daemon Mailer invented the internet in his garage while he was trying unsuccessfully to invent the first rental video store. Like the rest, Daeme is also making moves to cash in on BT's success and avoid eating peanut butter out of a jar livin' in his car the rest of his life. All during the night as he wiggles to an 'fro, some kinda machine records his thoughts, churning out a pile o crud to be compiled in the forthcoming tome, “I am Spam.”
View all posts by Daemon Mailer →
This entry was posted in Exclusive! and tagged aging hypocrites want their piece of the pie, apple produscts, daemon mailer, my goodies, the brutal times, the genius bar, the starbucks generation, vermont. Bookmark the permalink.