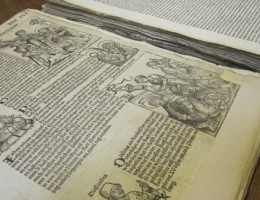 By El Toro, PITTSBURGH – A 500-year-old book somebody found here the other day is really boring sources are telling the Brutal Times this morning.

“I didn’t even open the book – just looking at it made me drool all over myself,” ejaculated Osama Bin Laden, 30, a tourist from Los Angeles.

You look familiar – do I know you from somewhere?

“I get that all the time. I used to be the world’s most wanted man.”

“Not to sound bitter, or anything, but do you really think Julian Assange is all that?”

Books, which predate the Internet, are obviously boring. But when a 500-year-old book is found to be boring, the intelligentsia receives a fresh body blow to the thorax.

“The discovery of the book, whose name I forgot immediately, sent me into a coma and caused my eyes to permanently close,” chimed Professor Rant Foaming, of the prestigious University of Buffalo.

Somebody sent someone tweets about it and a guy on Facebook was seen holding a bulky boring thing that may have been a book.

500 years ago things were probably different than now. Definitely, guys got laid more often and gas was cheap. People started most of their shoptalk with, “Once upon a time..” No one fought in the streets over who was better – Radiohead or Kid Rock. People had nice hair cuts and went to school early. When people wrote graffiti on your car door it didn’t say “Die, Freak,” it said “Have a great day”.

You could start a new paragraph for no reason.

The book is really dirty and gives off a foul odor that cannot be washed away from clothes, even using a pricey detergent.

Still, some book-lovers say they might pay through the nose to even catch a quick whiff of its molten contents.

“People who say a 500-year-old book is boring, without even having the balls to read the thing, are not my cup of tea,” boasted pert 22-year-old philosophy student Nora Winger, 22, and pert. “If that thing fell into my hands, I’d read it cover to cover.”

The thing is crusted with the remains of Indiana Jones’ poop chute.

“I suppose that makes you laugh.”

Name one book that you tweeted to online friends about on Facebook or that inspired you to rap on a bus.

“How plain. Don’t you think that we need to read in order to have metaphors with which to think comparatively, maybe even empathetically?”

That sounds a lot like you lifted it from Oronte Churm over at McSweeney’s, but, absolutely no, I mean, I live in a free society.

Born angry, shitdisturber El Toro is an explicit indictment of something. Eschewing bathroom breaks, Toro sends a signal to hisself by reading strangers' email. Ringleader of BT's notorious bling ring, ET has learned the hard way you don't bring sand to the beach. That's whut he says anyway.
View all posts by El Toro →
This entry was posted in Highlighted Brutality and tagged 500-year-old book is really boring, el toro, indiana jones' poop chute, inspired to rap on a bus, it made me drool all over myself, julian assange, osama bin laden, philosophy students, pittsburgh, professor rant foaming, radiohead vs kid rock, roy kesey at mcsweeney's, the brutal times. Bookmark the permalink.