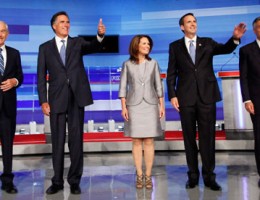 By Styles Cradgerock, Florida, ORLANDO- Who’d want to go and sit through another Republican 2012 Presidential Master Debate? But with The Serge off sick with Ebola and Barry Husein confined to his room again I drew the short chopstick and jetted off from Tokyo to sunny Orlando, Florida, to sleep through most of it – the 8th Republican Master Debate in as many weeks.

The nineteen-hour event was sponsored by global toy giant BB FunCorp and fantastic Internet social networking tool Fluffer, in keeping with an emerging trend in which mainstream media organizations do the most adorable thing and try to control our thoughts.

As Romney, Perry, and the other 8 dudes and one dudette stood cemented to the stage, I licked my ice cream.

It was cool in the barn, but the breath of the family sitting behind me melted my cream and I had to lick faster and faster to keep up with the melting? If you’ve ever eaten ice cream you know what I mean.

Anyway, Romney vouched for himself over and over, repeating, “I’m a great dude. I’m from Romulus. We have…uh…gigantic spacecraft that can destroy the earth….I have three peni (penises).”

“There are a lot of reasons not to elect me,” Mr Romney ejaculated. “One reason to elect me is I know what I stand for. I’ve written it down. Words have meaning. Some words rhyme. Some don’t. Some begin with capital letters. Yep.”

Perry’s response was forceful and personal. “I don’t think you have a heart,” Perry told his critics. “I like that.”

Without saying anything, it was hard to tell where other candidates like House Speaker Newt Gingrich stood on stuff.

Rep Michelle Bachmann of Minnesota reminds me of Barbara Bachmann, who is Ringo Starr‘s wife. For people under 50, she doesn’t remind you of anyone.

Rep Ron Paul of Texas, former New Mexico Gov Gary Johnson, businessman Herman Cain and former Utah Gov Jon Huntsman came to the master debate too, but instead of networking they just stood around awkwardly and nursed their drinks.

“I forgot my buisness card, but you can connect with me over LinkedIn,” quipped Johnson.
“No, I’m totally being serious,” he went on.

Rick (The Dick) Santorum told a gay soldier serving openly in Iraq that sex had no place in the military. Legally, he was right: although you can tell people your what you wanna do with them, if you get caught doin’ it with ’em your pee-pee will get whacked. And just like the last master debate, he kept referring to himself as “Rick Santorum”. Vice presidential material, this one.

Herman Cain was declared the surprise winner of the debate, to the shock and awe of many Republican faithful. Does this mean anything? Well, yes: he sounds better than rest, at least in the way that he doesn’t seem to be flat out lying about everything. And no, because if you look back at prior Republican master debates in the last few elections, it’s very often Ron Paul who was selected as the winner. And he ain’t ever gonna be president.

Closely following the rules of Pythagorus - to abstain from beans, not to pick up what was fallen, not to eat the heart, and refusing to look in a mirror after midnite, Cradgerock gets all up in the grills of all the world's leaders and their pets like you knew he would.
View all posts by Styles Cradgerock →
This entry was posted in Exclusive! and tagged barbara bachmann, bb fun corp, florida, fluffer, ice cream, michelle bachman dominatrix, mitt romney, orlando, Presidential Daily Brief, rick perry, rick the dick santorum, ringo starr's wife, romulan in the white house, romulus, styles cradgerock, the brutal times, why try harder? reoublican presidential 2012 master debate 8 spoilers. Bookmark the permalink.