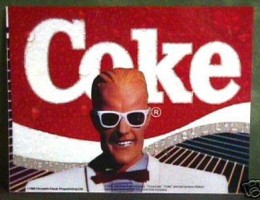 By DJ Salinger, LONDON – As London gets ready for the Olympics, single shoppers were shock-rocked to learn that long-time fellow Londoners and Deepresso artists, Radiohead will change their name to time with the August Olympic Opening Ceremony.

Asked why, guy, Yorke found time to fluff, “It’s just time…to move on,” causing many to speculate the enigmatic Englishmen are once again about to revamp their sound, image, wardrobe et all, in order to keep on keepin’ on, as it were.

“As it were,” confirmed lead guitarist Johnny Marr, via his mouth. “No one listens to the radio anymore,” he went on.

Radiohead fans will no longer be able to find the band’s music under the letter, ‘R’, according a source close to the band who prefers not to be named for this article because she doesn’t know what she’s talking about. “I think fans looking to download the lads best check under ‘V’ from now on, pert 58-year-old Canadian model Undo went on.

Can’t anything just ever stay the same?

Better than nothing, DJ Salinger shakes it where the sun don't shine. BT' s resident recluse on the loose, Salinger is the trouble with this generation, begging the question, What is the sound of one fist bumping?
View all posts by DJ Salinger →
This entry was posted in Thinking Man's Rock and tagged deepresso, dj salinger, fluffer, johnny marr, london 2012 olympics, olympic opening ceremony bands, radiohead change name to videohead, the brutal times, thom yorke, undo. Bookmark the permalink.