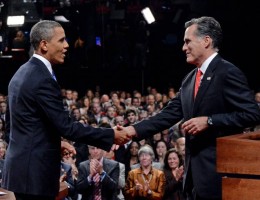 JIM LEHRER: Good evening from my bugged out eyeballs and distortion pedal effected voice and let’s begin with jobs. Who is going to sit through this since the audio is so fucked up?
PRESIDENT BARACK OBAMA: Well, thank you very much, Jim, for this opportunity. I feel YouTube shutting off all over the planet. Maybe the New York Times doesn’t know how to set up a microphone. (Laughter.)
MR. LEHRER: Governor Romney, exterminate.
MR. ROMNEY: Thank you, Jim. If you’ll just fast forward to 3:28 it’ll solve that audio problem.
MR. LEHRER: Mr. President, please respond directly to what the governor just said.
PRESIDENT OBAMA: First, I want to compliment Governor Romney on the technology they have there on Romulus, but I’d also like to remind him that we don’t have the technology to fast forward real life moments yet here on Earth.
MR. LEHRER: Governor Romney, do you have a question that you’d like to ask the president directly about something he just said?
MR. ROMNEY: Well, sure. I’d like to ask him how many people he thinks have sat through that audio glitch.
MR. LEHRER: Mr. President.
PRESIDENT OBAMA: Well, I think maybe none.
MR. LEHRER: All right.
PRESIDENT OBAMA: Jim, can they – can the American people hear us right now?
MR. LEHRER: What is the difference?
MR. ROMNEY: Well —
MR. LEHRER: Let’s just say they can see your arms flapping around but they have no idea what you’re saying.
MR. ROMNEY: But I — but I — right, right.
MR. LEHRER: Yeah.
MR. ROMNEY: Yeah. Well, but — but —
MR. LEHRER: What is the difference?
MR. ROMNEY: A woman grabbed my arm.
MR. LEHRER: All right, go —
MR. ROMNEY: Look at my hair. Raspy voice. I’m ansty. Number two, (scattered laughter) — but that — that is the case, all right? I will not reduce the taxes paid by high-income Americans.
And number three, I will not, under any circumstances, cite a study. Middle-income families. There are all these studies out there.
But let’s get to the bottom line. That is, why? And the reason is because I can. Trickle down. Thank you.
MR. LEHRER: All right. Mr. President Obama, respond directly to what Romney said about that uh your trickle down thingy.
PRESIDENT OBAMA: Well, uh, as you can see I’ve gotten much thinner than Romney. That’s the biggest impression. Also, give him something to eat – I think he’s crashing or something. You too, Jim, what’s that fire in your eyes?
For 18 months I’ve been eating pretty much next to nothing, ergo weight loss. If individuals avoid eating or drinking their weight goes down. It’s — it’s math. It’s arithmetic. Race to the top. Slots. Jobs. Teachers.
Now, Governor Romney, I was never beefy to begin with. And the reason this is important is because by doing that, I basically agree with what Romney says about everything, so this debate if you will is much like Bush-Gore back in 1999. You can see where I’m heading…

PRESIDENT OBAMA: Uh, can you give me 5 seconds here?
MR. LEHRER: Your 5 seconds is up.
MR. ROMNEY: Absolutely. I’ll elaborate. I like the fact that in my state, we had Republicans and Democrats come together and work together. What you did instead was to push through a plan without a single Republican vote. As a matter of fact, when Massachusetts did something quite extraordinary, elected a Republican senator to stop “Obamacare,” you pushed it through anyway. So entirely on a partisan basis, instead of bringing America together and having a discussion on this important topic, you pushed through something that you and Nancy Pelosi and Harry Reid thought was the best answer and drove it through.
PRESIDENT OBAMA: Governor Romney said this has to be done on a bipartisan basis. This was a bipartisan idea. In fact, it was a Republican idea.
And Governor Romney, at the beginning of this debate, wrote and said, what we did in Massachusetts could be a model for the nation. In fact, it’s estimated that by repealing “Obamacare,” you’re looking at 50 million people losing health insurance at a time when it’s vitally important.
MR. LEHRER: Sweet Baby, What do you have in mind?
MR. ROMNEY: Let — well, actually — actually it’s — it’s — it’s a lengthy description, but number one, just stop listening now, because I’m going to say something boring. But again, in a more, sort of frantic way than uh, what’s his name over there. In my opinion, the government is not effective in — in bringing down the cost of almost anything. Dut da dut dut diddly doo. Punchline.
PRESIDENT OBAMA: They never show the audience. Is there an audience here tonight? It’s awfully dark and silent out there.
MR. LEHRER: All right, we’re going to move to a —
MR. ROMNEY: No, I — I have to respond to that —
MR. LEHRER: No, but —
MR. ROMNEY: I’m doing good tonight but I’m not perfect. I should remind you of Nixon – look at my shoulders! I’m wound tight! I’m boxed into this boxy suit! Mad Men! The 1950’s! Me!
MR. LEHRER: That is a terrific segue to our next segment, and is the role of government. And let’s see, role of government and it is —looking good. While spewing the crappiest crapola. Am I right?
PRESIDENT OBAMA: Well, I definitely think there are differences.
MR. LEHRER: This better be good.
PRESIDENT OBAMA: The first role of the federal government is to keep the American people safe. That’s what George W Bush and Cheney said. And as commander in chief, that is something that I’ve worked on and thought about every single day that I’ve been in the Oval Office. Just like them, where it matters most. On the golf course.
But as Keanu Reeves understood, there are also some things we do better together. So I’ve constructed a matrix in which freedom can be managed. Now I’m gonna say some disappointing, uninspiring stuff. While most people would talk about the Civil War as a period of tragedy or heroism, I’m gonna use it to talk about…railroads?!
So in the middle of the Civil War, Abraham Lincoln said, let’s help to finance the Transcontinental Railroad. Let’s start the National Academy of Sciences. Let’s start land grant colleges, because we want to give these gateways of opportunity for all Americans, because if all Americans are getting opportunity, we’re all going to be better off. That doesn’t restrict people’s freedom; that enhances it. Bush and Cheney believed that too, by the way, just for different reasons.
MR. LEHRER: Two minutes, Governor, on the role of government, your view.
MR. ROMNEY: Well, first, I love great schools. Boring. This is the kind of trite unscripted crud my opponent should nail me for.
The role of government — look behind us: the Constitution and the Declaration of Independence. Look, also, how the New York Times / PBS cameras actually follow my cue and zoom out to show the Constitution and Declaration, albeit in a blurry cut off view, which is, funnily enough, the way I actually see it, too.

A bit of a toff, really, Admin inhaled the classics early. His ears are ringing and he plans...to answer them.
View all posts by admin →
This entry was posted in Presidential Daily Brief and tagged obama romney debate the director's cut, obama romney october 3 2012 debate, styles cradgerock, the brutal times. Bookmark the permalink.