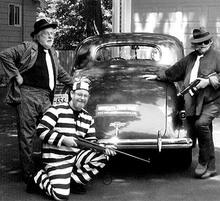 By Marshall Stack (NEW YORK CITY) -At the Pinecrest Public Libary in Quikton, things just aren’t the same. Gone are the boisterous crowds of youngsters eager to chew the fat in low whispers about their favorite scribes. No longer do the magazine racks congest with the wrinkled flesh of the towns’ elders as they shuffle about uselessly.

For it was a mere six weeks ago ( a fortnight – in Canadian English) that the beloved libarian of these hallowed shelves went what some of us might refer to, as “ape”.

It was a busy afternoon at Pinecrest February 18 when veteran Quikton librarian Dot Fuller, 58, was manning the returns desk where books are returned by book borrowers. A modest line-up of smartly-dressed children was converging and jostling toward her with books held aloft in McDonald`s sandwich stained fingers, straining to be returned. This unusual crush of action combined with the libary receiving it’s first copy of “Harry Potter and the Deathly Hallows” made for an incendiary waiting to blooey. Then, at approximately 9:23 am, all Hell came untied.

“Oh, my! She just started throwing things. She threw a globe at me then she pushed over the card catalogue! The card catalogue, for Betsy’s sake!” recalls part time libarian Grace Smitheram, 58, who witnessed the scene while wearing her favorite wool sweater which is navy blue and was on sale when purchased several years ago.
“I just kept yelling `Dot! Dot! Stop Dottie! It’s not worth it!’ But she just kept on coming like a tank. A big, mad tank.”

“Yeah, she’s a nut-job alright,” quipped local geekoid Ethan Madden, 17, who despite his unshaven countenance and poor posture holds a part-time clerking position at the library.

“We would rearrange the cards in the catalogue like, out of order right? So she’d go right nuts and man did it work!”

Yet some Quikton residents are more sympathetic.

“I don’t think she should be fired,” says Mary Cribbins, 26, who said Fuller helped her find several Quebec authors with which to pad her Canadian Literature Studies essay and waived an overdue fine on one occasion.

“She’s a public servant and pressure is pressure but if you can’t stand the heat then maybe you shouldn’t be in charge of the returns desk. Maybe she should just be in charge of the photocopier. I mean she freaked me right out and I peed a little and it was really embarrassing, but it wasn’t 911 like everyone’s making it out to be, and she’s certainly no bin Laden, ok?”

Hoping against hope that this was an isolated incident, The Brutal Times hired a team of undercover unpaid interns to infiltrate Quikton’s shadowy murky viscous libary system. One of them, Clara Musgrowe, a 22-year-old philosophy student,who has a long shag cut, discovered some riveting facts: library related disturbances have sharply increased in the last year.

Over dinner at Ssh…Kebab, Grande Chef Otto’s renowned seafood bistro, Clara imbued the night with what can only be described as a “cold roiling fire, which was not at all unpleasant, and lingered,” said Barry Hussein, who was by her side up until about ten.

“Up until now things have been relatively calm with a mere two libary disturbances worldwide every three years,” said Ms Musgrowe. This year it seems, the number has “skyrocketed to four per annum in North America alone; something is stressing out the librarians of the world – something…evil.”

Harrison Garabang, 30, who can usually be found at Pinecrest tracing his family’s rich history, offered further insight. ” Because, y’know sometimes they’re such little bastards, eh? ( the children who came at Ms Fuller Feb 18). I treasure the little ones but by Jesus there are days when you could happily murder ’em with your bare hands. I’ve seen it all. I mean, I feel like an air traffic controller sometimes! There could be five or even six at a time waving their books around and crying, peeing, stealing the cup-o-soups, oh my goodness yes. I could just spit.”

But why the roiling chaos in our nations’ libraries, guy?

“I really don’t know,” said Garabang. “It’s not like we have good computers here. How can we protect ourselves, you know? I mean last Saturday we were so busy I almost took a flip. What happened to the xbox, you know? Or the Internet machine? Why can’t more of them (the children who came at Ms Fuller Feb 18) stay indoors? Hey! look at this – my father’s Barack Obama, and my granpappy’s Dick Cheney!”

Dot Fuller was fined twenty dollars ( 4 cents Canadian) for her outburst, and was required to buy cupcakes for the knitting club who were next door at the time and greatly fussed by all the hoo-hah. She has since retired from her post as libarian and is now working part-time at the complaints department at Kresge’s.*

(*A variety store chain in the United States)

Failing to heed his own warnings, specialist in moral turpitude Marshall Stack has hit a roadblock. Yes, gang, just like you and me, he's the opposite of delicious. According to passersby, Stack possesses that rare commodity of being able not only to control his own weight, but also that of others. We're so proud of him for not breaking anything.
View all posts by Marshall Stack →
This entry was posted in Bookmobile and tagged barack obama, bookmobile, dick cheney, librarians, librarians threaten national security, marshall stack, osama bin laden, the brutal times, us politics, war on terror. Bookmark the permalink.