Anarchy Condos Under Seige in Toronto 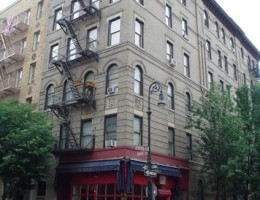 By Smia Oots, THE HOLY CITY OF TORONTO – Anarchists dressed in eye-numbing colored jumpsuits, bathing trunks and business attire hurled themselves against each other and their own underground condo, Toronto’s fashionable Queen’s Quay residence, The Anarchy Condos At No Fixed Address.

“I’ve never seen anything like it,” whispered Constable Ray Goolens, 30, stroking his well-groomed handlebar moustache with his right hand. “I’m secretly left-handed, so for me the right hand is ‘The Stranger’, he went on.

Anarchists, stoked up from an afternoon performance of shock-rocker Green Day’s Broadway hit, American Idiot, twisted and frugged the day away yesterday, shouting obscenities and sports metaphors at riot police.

“Let’s use the sound cannon on that guy,” said Constable Wendy Mealet, 56.

The pricey sound cannon, known as the vuvuzela, shoots pulses of bass samples from soothing R&B acts as Black-Eyed Beans, and Toronto’s own Will Smith.

Anarchists dislike it and cover their ears.

“The history of The Anarchy Condos at No Fixed Address has indeed been checkered,” ejaculated TTC driver Ted Nim, 20. ” I seen it as I drived my red rocket back to base every day,” he went on.

From it’s unique urine aroma which peppers its mezzanine and box-like suites, to its lack of electicity or phone service, residents were drawn to Anarchy out of a desire to recreate themselves and bond with artists who topped themselves.

“My grandson Baz lived in the Pink Floyd suite until they dragged him kicking and frumping to the loony bin,” said old fogey Nancy Barelle, 40.

The Loony Bin is another exclusive Toronto Queen Street condominium.

Do the anarchists want anything?

“They want to watch music videos and see that Green Day musical over and over,” says Carlos Santos, 14, who has written about them on his blog, rightwingthinktank.com.

How about the Internet? Do they like it, or do they eschew it like Buddhists or something?

Oh, no – they loooove it. In fact, if you’ve seen the commercials on tv, you’d see that Buddhists like the Internet, too.

I don’t own a television.

What, are you an anarchist or something?

Smia Oots is a free-floating wild card racked up on painkillers and an automated sequence of commands who came to Tokyo to pursue her interest in social drinking. Always in search of new moments that can only live on in recollection, Oots asks we put the Enlightenment behind us, stat.
View all posts by Smia Oots →
This entry was posted in Canaduh and tagged anarchy condos, Canaduh, G-20, green day, smia oots, sports punk, the brutal times, toronto anarchists, vuvuzela. Bookmark the permalink.

2 Responses to Anarchy Condos Under Seige in Toronto