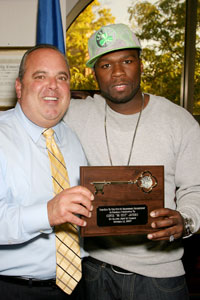 By DJ Salinger, CONNECTICUT- American film star and hip-hop music sensation 50 Cent was given the key to the city of Bridgeport by maverick Mayor John Fabrizi just weeks ago in a sizzling gala event celebrating the celebrity’s efforts to “tell people about drugs.”

The treasured one-size-fits-all key lent to Mr Cent by Mayor Fabrizi was specially designed by HarvestHome to open any city lock, whether residential or commercial.

While some residents welcomed 50 into their homes, others voiced concern that he might wake sleeping elderly relatives.

“I’m not saying that givin’ the key to 50 was a bad idea,” commented Republican City Councilperson June Gainblock, “but there was a concern that since not every citizen is a fan of rap music that some older taxpayers might not understand why the city was allowing 50 free admittance into their homes.”

Gainblock insisted that The Brutal Times include in this article that she, herself is a big fan of hip-hip music. “I personally would have no problem welcoming 50 into my home at any hour of the night,” she insisted.

Now the key has gone missing.

Patrolman Garret T. Koontz told reporters this morning that “Mr Cent apparently lost the key after a night out at the posh Bridgeport eatery Pasta la Vista. At that time he was primarily in the company of the proprietor of that establishment, Grande Chef Otto. Grande Chef Otto has agreed to undergo a lie detector test and is being interviewed by detectives as we speak.”

Although 50 has yet to issue a statement regarding the crisis, one of his entourage, Jimmy Jam-san, alleged the Grande Chef had hidden the much sought after key in a giant cake and made it disappear.

Since the loss of the one-size-fits-all key Mayor Fabrizi has ordered an executive State of Emergency come into effect until a lucrative contract is awarded to a single locksmith company capable of changing all city locks.

Luckily, it appears HarvestHome may be able to step up to the plate.

“Protecting citizen’s property is at the heart of what we do,” said HarvestHome president Donny Berns. “Fortunately since we’re the company that designed the key, we’re in a fantastic position to come in and offer a practical business solution to the problem,” he offered in assurance to restless residents.

Better than nothing, DJ Salinger shakes it where the sun don't shine. BT' s resident recluse on the loose, Salinger is the trouble with this generation, begging the question, What is the sound of one fist bumping?
View all posts by DJ Salinger →
This entry was posted in Thinking Man's Rock and tagged 50 Cent, awards, bridgeport, celebrity gossip, connecticut, dj salinger, hip hop, home invasion, key to the city, privacy, rap, the brutal times, Thinking Man's Rock, war on drugs. Bookmark the permalink.