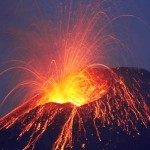 “Japan, one of our most ah steadfast uh allies – in the fight to ah, to really get things turned around over there ah in Iran, has ah to the best of our knowledge, ah promised to deliver those volcanoes before breakfast to ah Mr Hussein,” Mr Obama commented via his Blackberry text machine.