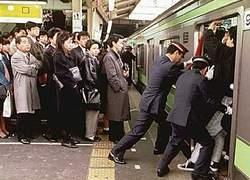 By Ohashi Jozu, TOKYO – As the foreign population bursts and explodes in Japan, leading to more and more awkward moments between normal Japanese and uncouth Americans, forward-thinking Japanese transportation companies have come up with a novel solution: Foreigner-Only train compartments.

“We have had already such problems as you know of Japanese salaryman (businessman) who was touching the behind of Japanese lady on a train,” informed Odakyu Train Corporation spokesman Ohashi Taro, 50, Wednesday. “Such programs of such a kind such as Woman-Only train compartments have had much success; so we thought we had better to do that with foreigner as well,” he added, with a smile.

The Odakyu Train Corporation attracted international attention 2 years ago when it introduced Woman-Only train compartments along some of its busiest Tokyo train lines.

The compartments, found usually at the head and tail of each train feature colorful pink flower-patterned signs which notify riders that only attractive females may ride during prime groping hours of 7:03am-9:11 am.

Foreign people often travel to Japan to have sex with Japanese women, complain about their lack of success at having sex with Japanese women, and to attempt to exchange their weak currency for sturdy Japanese yen in convenience stores. Usually overweight foreign men try to pick up the best-looking Japanese office women during rush hour when trains are packed tight with sweaty commuters and sexual energy throbs along every Tokyo train line.

“The trains are the perfect place to find a mate, mate,” said Hugh Taddleback, 36, a part-time English conversation teacher at KiddyTime One-On-One English school in Shinjuku. “Because you’re on the train, you’ve got the perfect pick-up line: ‘Hey, we’re on the train.’ Then she’s like, ‘Yeah!’ and you’re like, ‘Yeah!’ You know – it’s all good,” he said, gripping his overnight backpack straps.

But the good times are about to end.

As of March 2008, Odakyu, Keio, Seibu, and Tobu Train corporations, which amongst themselves account for two thirds of the Tokyo railway system, plan to alter their standard twelve-car trains to include an additional “International Caboose”, which will be reserved for foreign tourists. Foreigners who insist they are residents, claim to be employed at Japanese firms, or claim to have been born in Japan will also be encouraged to experience comfort of the Caboose, which will be operational between 4:59am-12:38am. when the final train coasts smoothly home.

“Although it will cost much money, Japanese train corporation must provide foreigner with private train cars,” said Shimizu Soichiro, 58, spokesman for Seibu Train Corporation. “Because many many foreign people come to Japan and cannot understand Japanese language it becomes necessary to do so with Gaijin Kyabbu,” he elaborated. “Gaijin Kyabbu” is the festive term native Japanese use to describe the International Caboose.

The Caboose debuts in Tokyo March 12.