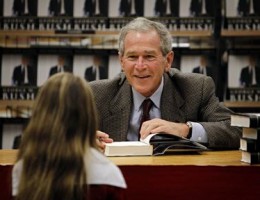 By Styles Cradgerock, WASHINGTON – Boy, how the times have changed. Back in 2003, I was just another fresh face with chronic stomach pain trying to land an unpaid job at The Brutal Times when it was just a weekly free box of tissues handed out at my local car wash, and yet another young guy by the name of George W. Bush was just revving up to land a whopping kick on Middle East henchman Saddam Hussein’s kaboose.

But these days, both of us have mellowed, with me mounting an ancient exercise bike and humming to myself, and the former U.S. President penning a white knuckle-roller coaster ride of a memoir, Decision Points, in which he claims, among other things, that the Iraq War was “an hoax.”

I wanted to talk more about parallels betwen the two of us to sort of increase my stature, but they told me I can’t, so here’s my exclusive interview with the former President, recorded on my iPad in the White House Oval Office, which President Obama was courteous enough to lend us.

President Bush, you disappeared from the public eye for a long time and now you’re back from outer space, you’ve written a book and you’ve got a smile across your face, why is that?

“Well, Styles, I spent two years writing to inform the American people better of the situation and kind of keep ’em up to date there.”

Up to date where?

“With what I’m doing, where I’m at, where I’m headed, that sort of thing.”

Oh sure. Why not call it Situation Points?

“Heh-heh, book’s already been published, for one thing, but you might have something there.”

Mr. President, excuse me for asking this, before we get to the main meat of the interview, but, are you in fact the same person that you were a number of years ago?

“The same person? I think everybody – I think certainly everybody, and myself, I’ve gone through some changes in the last few years, and I think the book reflects that. I think that’s what it’s all about, really.”

No, I mean, are you in fact the real George W. Bush? Like the way the Beatles killed off Paul McCartney back in 1966 when he was getting a little big for his britches and replaced him with that Canadian bloke Armband Armband on Sgt. Peppers and-”

Sorry. But they insisted I ask that.

“Heh-heh, no, Styles, I’m not a clone, heh-heh, of myself. Now, were there any other questions that you wanted to ask me about the book?”

That’s a relief. Well, you drop a lot of bombshells in the book – among them that you approved waterboarding of suspected terrorists, drew up a plan for attacking Iran and that the Iraq War was “an hoax” as you put it.

“Yes, exactly. It’s a popular term these days, isn’t it? I mean, eveybody’s going around saying this or that huge thing that happened, that we thought we can rely on, didn’t really exist or happen, that it’s in effect an hoax or something.”

And you say that about Iraq.

“Exactly, yes. The weapons of mass destruction, all the rest – an hoax, really. I think nowadays most of the viewing public out there probably agrees with me.”

“Exactly. You have movies like that out there kind of encapsulating things for you, really groundbreaking stuff, but whom really knows what it means at this present time?

“Not really my cup of tea. Not enough meat there, really, once you get past the opening Kubricky scenes, and I guess the fact of the technology itself.”

I can’t let you get away from this one without mentioning that not so long ago, during your stint as a consultant for the prestigious Los Angeles fashion plate Neck & Penis you stated that the Iraq War was “ironic“. Have you gone and changed your mind on that now?

“Yes. It was an hoax. We made stuff up and it never happened. They made me say that back then or I wouldn’t get my paycheck. I think if you’ll recall – Styles – that at that junction, I’d say it was 2007, 2008 or so, everybody was wearing thsoe big chunky black frame Ugly Betty Williamsburger hipster glasses and irony was pretty much the schtick, right?”

Yes, Mr. President, I do recall that.

“Well, I just kinda went along with that.”

“So now everybody wants this honesty thing, you know, and I’m kind of going with that and see where it takes me.”

See where it takes me. That sounds like it could be a good name for a sequel to your book.

“Heh-heh, Styles, it’s been a pleasure.”

Closely following the rules of Pythagorus - to abstain from beans, not to pick up what was fallen, not to eat the heart, and refusing to look in a mirror after midnite, Cradgerock gets all up in the grills of all the world's leaders and their pets like you knew he would.
View all posts by Styles Cradgerock →
This entry was posted in Latest Brutality, Presidential Daily Brief and tagged barack obama, car wash, clones, decision points, george w bush, iPad, Iraq War was an hoax says new bush book, neck & penis, paul mccartney, saddam hussein's kaboose, sgt. pepper, styles cradgerock, the brutal times, tony blair. Bookmark the permalink.