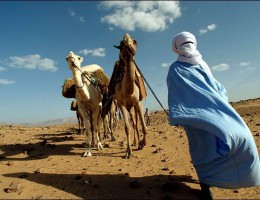 By Grande Chef Otto, TRIPOLI – Because there was nothing else on we were stuck watching that revolution thingy in Libya? The one which should have been exciting since their dictator dresses like Michael Jackson and has more attitude than Snoop Doggie, but is actually a snore fest since now all the other channels got wars on `em too?

But then just before The Serge was gonna change the channel that Christiana Amanpour shocked us out of our comfy seats with some story about cooking and lack of kitchen counter space becoming an political hot potato for the rebels in their fight to unseat strongman Mummar Ghadaffi.

“Ghadaffi understands the need for kitchen counter space,” ejaculated Ken Haymen of the Rand Institute, a sidewalk chalk artists’ think tank. “He knows a good sauce depends on adequate counter space. Likewise, you can’t bake a cake or stuff a turkey if you’re feeling cramped or boxed in,” he went on.

“What the rebels’ve failed to grasp in their rush to seize power is that they’re going to need to show people they can clear away household clutter and make it easier for the average Libyan to cook up a tasty meal at home,” he kept talking.

Can’t Libyan folks go eat out or something?

After Ken left, we shouted our questions at Christiana, who looked at us blankly from the TV, but I think what she said back was something like this:

“Um, what you have to consider is that the cost of going out, to say Subway or Denny’s may be life-threatening injury.”

So, they’re saying it’s not worth it.

“Yes, that would be correct.”

Well, how much space the average Libyan need to cook up some good grub?

“These are things the rebels, or more likely, Ghadaffi, are going to have to suss out on a case by case basis, sitting down with families, talking about their favorite meals, seeing how big the people who are gonna do the cooking are – the list just goes on.”

And you think Ghadaffi would be better at doing that?

“Well, who knows? But I’ve talked to lots of rebels, and just by being rebels, they don’t want to do what you ask them to do, so, no – I don’t see them reaching out to provide more kitchen counter space, sadly.”

Huh. So, do you cook at home then?

“No, I spend my lunches at a place called Pasta La Vista, and most evenings you’ll find me at Ssh…Kebab.”

What a coincidence – I run those two establishments!

“The planet is so small. I’d really like to recommend your 6 for one specials.”

You’re too kind, too kind. These are the type of moments that really restore one’s faith in something.

GCO is a third generation Grade AAA Grande Chef, whom has served France with distinction since first garnering the honor in 1963.The title of "Grande Chef" is bestowed by the prestigious Paris L'Ecole du Piscine Noir uponst those rare experts in the culinary arts willing to take unprecedented risks in the pursuit of achieving gastronomic perfection. He is also the proud owner of the award-winning bistros Ssh..Kebab, and Pasta La Vista.
View all posts by Grande Chef Otto →
This entry was posted in Presidential Daily Brief and tagged christine amanpor, Grande Chef Otto, lack of kitchen counter space in libya a political hot potato for rebels, michael jackson, mummar ghadaffi, pasta la vista, ssh...kebabsnoop doggie, the brutal times. Bookmark the permalink.